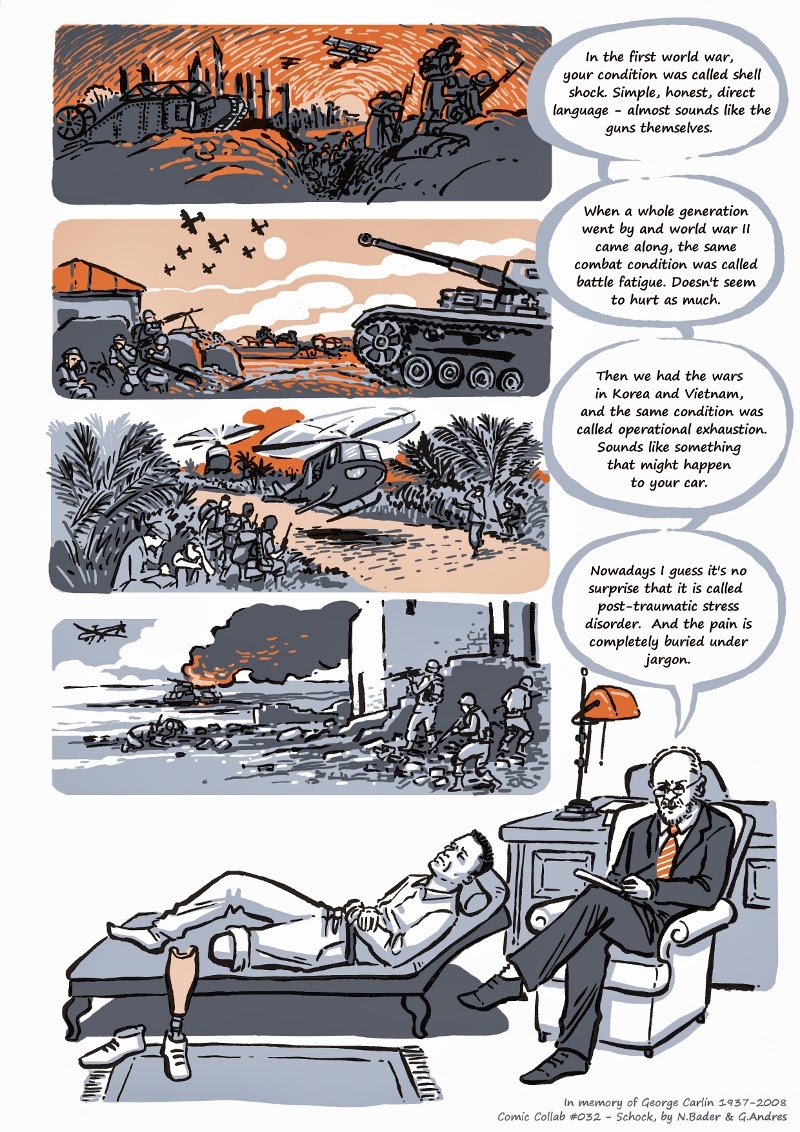 concept & research by Gabriel Andres, drawings by me.

Context:
George Carlin on soft language: "(...) There's a condition in combat. Most people know about it. It's when a fighting person's nervous system has been stressed to it's absolute peak and maximum. Can't take anymore input. The nervous system has either (click) snapped or is about to snap. In the first world war, that condition was called shell shock. Simple, honest, direct language. Two syllables, shell shock. Almost sounds like the guns themselves. That was seventy years ago. Then a whole generation went by and the second world war came along and very same combat condition was called battle fatigue. Four syllables now. Takes a little longer to say. Doesn't seem to hurt as much. Fatigue is a nicer word than shock. Shell shock! Battle fatigue. Then we had the war in Korea, 1950. Madison avenue was riding high by that time, and the very same combat condition was called operational exhaustion. Hey, were up to eight syllables now! And the humanity has been squeezed completely out of the phrase. It's totally sterile now. Operational exhaustion. Sounds like something that might happen to your car. Then of course, came the war in Viet Nam, which has only been over for about sixteen or seventeen years, and thanks to the lies and deceits surrounding that war, I guess it's no surprise that the very same condition was called post-traumatic stress disorder. Still eight syllables, but we've added a hyphen! And the pain is completely buried under jargon. Post-traumatic stress disorder. I'll bet you if we'd of still been calling it shell shock, some of those Viet Nam veterans might have gotten the attention they needed at the time. I'll betcha. I'll betcha.(...)"
Posted by Nadia Bader at 10:00 AM